I would start the post by giving you a little trivia. The word podcast was not Apples Inc.‘s creation, considering everything that has a pod in it reminds me of them. But we did get the term through one of its products, i.e. iPod plus broadcast made it podcast. Whatever it is, podcast was never a masses-term in India. You either have heard the term or you do not care enough to know about it. Now you don’t have to swell your eyeballs, as I am not talking about you. There are exceptions everywhere. Things would have been different if you had an Indian-podcast you could boast about. You know what I am getting at.

2009 saw a revolution in the name of The Flaming Skull Podcast. What started-off as a medium to feature Indian metal bands, more so those you knew about, has now become a benchmark. A judging criteria for a band’s music. If you play metal and if you are good at it, then you ought to be on this very podcast. Tighten up !

The Flaming Skull Podcast (tfsp) is the brain-child of Malcolm Soans who was an ardent follower of metal-podcasts and wanted to see his own so that Indian metal is heard. Transforming this dream into reality was not going to be easy. It required a team that needed to think alike in terms of what has to follow. After all its not always that everything falls into place. The greatest advantage for the members of tfsp has got to be the fact that maximum of them knew the scene inside-out. They knew what exactly is working for the scene and what is not. Who need to be out there and who need not.

Tfsp is a team of 9 members that includes Abbas Rizvi, Aditya Rao, Akhila Shankar, Ashwin Sharma, Arun Iyer, Ayan De, Malcolm Soans, Roydon Bangera, Sean Pereira. Four of them can drink like a fish and still ask for more but we’ll discuss that some other time. The podcast is recorded at 2 studios – MotorG Studios and Studio72. 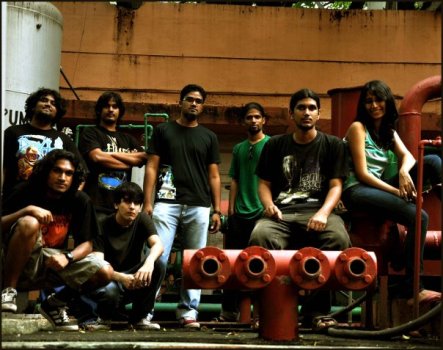 The latest move by the team is The Flaming Skull Rockcast wherein bands that play bearable rock music are featured. Now the listeners also have an opportunity to be on the voice-cast by simply recording the review of any gig they attended and mailing it to tfspodcast@gmail.com. You can also place your advertisements on the podcast. 8 episodes down and still going strong with new plans everytime, I will take the liberty of saying that the tfsp team is satisfied with the way their efforts have been received. With the only difference being now they are in a demanding position. It is very clear what I mean.

Also from where I see it, the podcast came as a savior to those metalheads who always say they will buy a new album later. Reason – because they know the very next episode will have atleast one track from an upcoming release. No seriously. Now that is really innovative. India has premiers for almost anything that sells, including an ugly duckling choosing a husband on primetime television. But whoever cared about premiering a metal album. Tfsp made every new release even more special. Whether it was Bhayanak Maut releasing their Untitled, Infernal Wrath coming out with Inside Of Me or Devoid showcasing a single from their upcoming debut album. 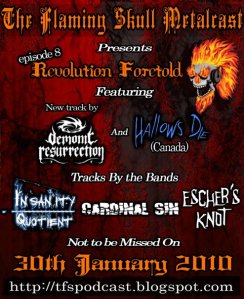 poster for the most recent 8th episode

Following a chest-swelling response over a period of time made them bother about the scene in a couple of neighbouring nations. Honestly, if not for the podcast I would not have even heard metal from Pakistan. I am saying that considering the fact that I download metal from places where traces of humanity are yet to be determined. Featuring Communal Grave from Pakistan, Funeral In Heaven from Sri Lanka, Chromatic Massacre from Bangladesh was an encouraging move atleast for the featured bands. Wonder what Shiv Sena has to say about this !

Like every other thing around, even this podcast has lot of scope for improvement. After my interactions with a lot of listeners, and I personally also feel that our host Malcolm needs to be a little more spot-on. Sometimes it does give a feeling that its script reading, but then there also has been improvements since the first episode. I’m sure Malcolm will make his listeners stop bothering on this issue pretty soon.

I wish all of you at The Flaming Skull Podcast all the very best. Featuring a band like Casket Garden makes it clear where they are headed. Lets aim for a day when Lamb Of God asks you to feature them. Yeah Roydon ?

Just a pricking thought, branching the podcast into a Rockcast was awesome but I hope there won’t be any temptations to start a pop-cast, considering some faggots are making their presence felt soon.

[For any details regarding the podcast visit their official site here : Flaming Skull official]

The Flaming Skull Forums – a writeup

6 responses to “The Flaming Skull Podcast”