Heyy Babyy and now Housefull. Two movies down and Sajid Khan has sealed his identity as a maker of no-brainer comedy flicks, of the type that only he can make.

Housefull (the title has got nothing to do with the movie) is a story about this loser Aarush (Akshay Kumar) who has bad luck written all over him. The movie opens in someplace named Macau. Aarush somehow lands up in all kinds of problems because of his luck and has nothing going for him. Even his chick dumps him stating his bad luck as a reason. Fed up he decides to go stay with his childhood friend Bob (Reteish) in London, who is married to Hetal (Lara). Here we are introduced to Devika (Jiah) who goes on to marry Aarush, only to realize she had other plans. Very conveniently she ditches the born loser.

Situations lead him to meet Sandy (Deepika) and he finally finds the true love he was looking for. But the catch here is Sandy‘s authoritarian brother Krishna Anna (Arjun) who needs to be convinced before taking the vows. In between all this we have Hetal’s estranged pappa (Boman Irani) flying to London to meet his daughter and son-in-law. All of these characters are intertwined to create a furor of comic confusion, and the climax is to prove that the loser is not afterall a loser. 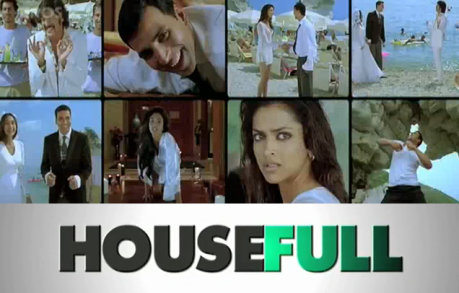 Performances
Akshay is ever ready to play such roles, comedy being his forte. Reteish does his part well and he should just stick to multistarrers. Lara Dutta is a non-actor and is very irritating. Always ready to shed off her clothes at the drop of a hat, even in Housefull she is there for the same reason. Not that I’m complaining but I ignore her. Deepika is lovable and there is no need for her to act here. Like I said only her presence is enough. No one cares whether Jiah Khan can act or not as she doesn’t let that aspect matter. She knows she is hot and if given a chance she would do the entire movie in a two-piece. Arjun Rampal plays this serious dude taking everyone’s case, and his role does not demand any acting. Boman Irani as the gujarathi pappa gets to your nerves after a while. He has done better comedy. Suresh Menon is wasted in a short role. The surprise element is Chunkey Pandey as Aakhri Pasta. Quite entertaining.

Verdict
Housefull is full of situational comedy and should be watched without any expectations. Music does not seem like a Shankar-Ehsaan-Loy creation, although it is. Dialogues have a lot of Sajid Khan in them and are ordinary. Housefull does not have a story, but it has picturesque locales. Watch the movie if you need a reason to laugh for three hours as an excuse for having nothing else to do.

Is a verbomaniac. And a human being. And that's where the problem begins. END_OF_DOCUMENT_TOKEN_TO_BE_REPLACED
This entry was posted on Sunday, May 2nd, 2010 at 12:00 am and tagged with akshay kumar, arjun rampal, boman irani, comedy, deepika padukone, heyy babyy, housefull 2010 film review, humor, lara dutta, nadiadwala grandson entertainment pvt. ltd, reteish deshmukh, sajid khan, sajid nadiadwala, shankar-ehsaan-loy and posted in Film / Documentary Reviews, Uncategorized. You can follow any responses to this entry through the RSS 2.0 feed.
« The Flaming Skull Zine
album review : Sacrament (2006) – Lamb of God »