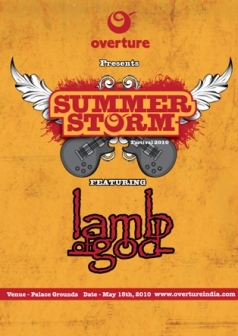 Before I go ahead and bare it all, those of you who missed this gig must already be feeling the punch. You could have avoided being an emo by attending the Summer Storm Festival presented by Overture India where groove history was made on our land when arguably one of the best metal bands in the world right now played for us.

Putting aside all the shit that happened at the Summer Storm pre-party gig the previous night which I shall write about soon, I was trying to avoid any lame reasons that could ruin the biggest day in Indian metal. I reached the venue at around 5 p.m. Getting in was not an issue at all, thanks to the crowd turnout that was way below expectations and the security check was a breeze.

My main issue was my disinterest in the openers as I wasn’t interested in watching them open for LoG. Somehow consciously or unconsciously me and my 15 other friends were delaying the trip to Palace Grounds. When we entered we got to know that scribe had just got done with their set, and from what I heard they kicked ass. Scribe is a bunch of really talented musicians and with the kind of experience they have i’m sure they did make the most of this. Scribe was the only Indian band that I wanted to watch. 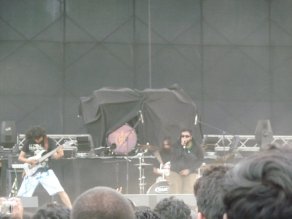 Anyways now that my concern about wanting a worthwhile band to open for a Lamb of God is out of the way I can proceed. I do not have any complaints as such because I do not have bands like LoG playing for me every other weekend. Had to make a point that me and many others for whom metal matters like a lot felt. Its not about being against Indian bands playing but about bands that are opening for such a name. The message is we have better bands. Just for the record, the opening bands were Bhoomi, Boomerang, Scribe and Extinct Reflections.

The last Indian act was Extinct Reflections. They were tight and all, and were spread out all over the stage but then personally they aren’t one of my favorites in the Indian scene. Wish Scribe had played last. But then I could wish the whole opening line-up was different. I am getting over this now. 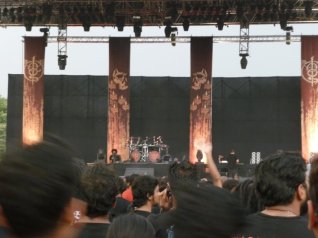 So by 6:45 the Indian bands were done. Now we did not expect LoG to hit the stage at seven and then go on playing till like ten. It was announced that they would not come for the next forty-five minutes or so. It was getting darker and everyone was growing restless. People around had started loosening up by exercising and doing fake mosh. We had some drunk fucks trying to ruin things around. I love drinking and I call them drunk fucks because a couple of them passed out and that too half an hour before LoG hit the stage. Alcohol cannot be insulted more.

Now what follows would be me trying to explain something that cannot be expressed. With people in a couple of rows in the front gasping for breath, the organizers had to ask the crowd to move their asses a bit towards the back. The crowd did because the organizers did not intend to begin before that. And it was almost that moment. I was trying to blink as much as 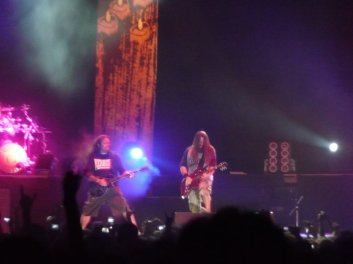 possible before they came on stage. With LoG chants in the air, all of us heard The Passing. And that was it. Everyone slapping their foreheads with that feeling, turning at their neighbours and bellowing the f-word. I was standing towards the left of the sound console. A flash of light and there they were. Mark Morton, Willie Adler and John Campbell have started playing In Your Words. Chris Adler could not be seen but then he could be felt, like really felt. Randy entered and it was a bedlam. And then the crowd automatically made space as they had to form their own mosh-pits. Everyone shifted around to adjust. The setlist included a mix of old and new tracks. The band did skip a few tracks that were very much expected, but then all of their creations are first rate. 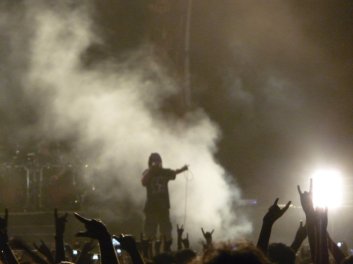 Randy‘s interaction with the crowd was a bit cold as compared to what we have been subjected to in those DVDs we watched. Of the little he spoke, something that surprised all was Randy talking about Gandhi being a punk rock guy, and then followed it up with The Contractor from their latest album. Randy even mentioned his contentment after looking at the response and said he would pass this message to his friends and other bands around, not to forget his promise of coming back themselves.

The gig got over before nine p.m. But complaining would not take this anywhere as only  after I came back to my senses did I realize that actually played sixteen tracks. When I 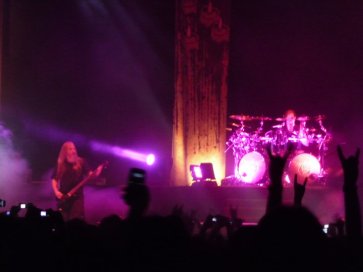 went about finding out what could have made LoG cut down on time, Arpan Peter (from Overture India) told me some of the prominent reasons were the difficulties that the attendees had to face in getting transport to commute back after 10, and non-availability of food as most joints are shut after 10. Valid reasons but they could sideline these on this day. Nevertheless it was a very well organized gig, and considering this was Overture India’s first attempt at organizing a gig at this scale, it was a success. Whatever anyone has to say I personally want to thank Overture for making this happen. You guys did what no-one else could. Period. Only thing that disappointed me was the turnout which was said to be around 7k. I expected more. A lot more. 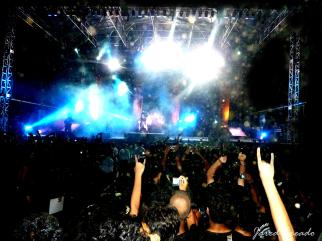 This gig would well be a turning point for the Indian scene and I hope the big four of thrash find their way to India soon. As for the rest of us who were present at Palace Grounds, we finally lost our virginity and what better than being banged by five Virginians. At the end of it all everyone around was heard saying, “We survived the Wrath, we lived through Lamb of God” and I could not agree any less.

[ All pictures included in the post – courtesy of Rohit Pereira (P-Man) and Jared Creado (Indian Rocket) ].