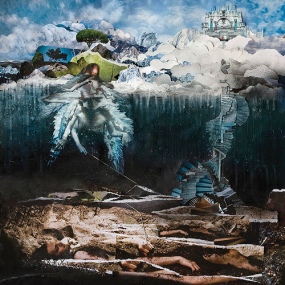 John Frusciante comes loaded with a past that just does not include being the lead axeman of a successful band but also a turbulent phase of drug overdose and a near death experience. And sure does he have lot more to share and speak about than his contemporaries primarily because he has been there and has spent more time with himself. That brings me to the point that he has released double digit number of albums and the count continues, with The Empyrean being his eight solo effort. After hordes of successful albums with RHCP, Frusciante quit the band last year to continue adding up to his solo discography.

Released in 2009, The Empyrean is the first solo album of his that I came across. Barring a track or two that appear ordinary, you are in for a discovery of sorts. Themes include ones that keep playing in your head when nothing seems to be working for you. The highlights of the album are Unreachable, Central, Enough Of Me, One More Of Me. Particularly Unreachable, it fucking elevates you from where you are to where you want to be. Empyrean is what he presents when he has come clean, so its time to trace his music backwards. 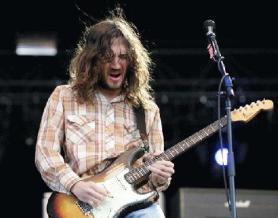 Through the length of the album, Empyrean seemed like a graph of emotions being plotted, with the curve peaking and dipping to extents that leave you stupefied at the way Frusciante controls you. Should I say controlling people with your art is an awesome thing to happen, then this baddie does it well. The Empyrean is a healer.

Is a verbomaniac. And a human being. And that's where the problem begins. END_OF_DOCUMENT_TOKEN_TO_BE_REPLACED
This entry was posted on Thursday, July 22nd, 2010 at 12:00 am and tagged with 2009 music releases, experimental/psychedelic rock, john anthony frusciante 2009, the empyrean album review and posted in Album / Ep / Demo / Teaser Reviews. You can follow any responses to this entry through the RSS 2.0 feed.
« rendezvous with Mogh
movie review : Khatta Meetha (2010) »