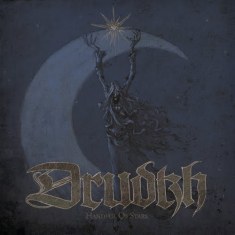 Dragging their metal a little too much, Drudkh release their eight album which clearly lacks the music this band is known for. After a spate of good albums, Handful of Stars fails to please me. A good recording surely takes away the music making ability of most bands and this album proves me right.

An album cover that is as dull and boring as the metal, the whole package seems to have taken the downward curve. With occasional screeching in between songs the album aims at concentrating on the themes and instruments but they fail. At places I even felt as if an alternative band is playing that thought drudkh is a cool name for their band. Yea I know that is shameful but that’s necessary before they start being a boy band.

It always felt worthy after spending time listening to lengthy Drudkh singles but Downfall of the Epoch, Towards the Light, Twilight Aureole make me rethink. Well, Drudkh‘s new album has only a handful of conviction in it and their future releases would not excite me as much.

Is a verbomaniac. And a human being. And that's where the problem begins. END_OF_DOCUMENT_TOKEN_TO_BE_REPLACED
This entry was posted on Friday, October 8th, 2010 at 12:00 am and tagged with 2010 metal releases and reviews, black metal, drudkh ukraine 2010, handful of stars album review and posted in Album / Ep / Demo / Teaser Reviews, Uncategorized. You can follow any responses to this entry through the RSS 2.0 feed.
« R.I.P. Amit Shenoy
album review : Axioma Ethica Odini (2010) – Enslaved »