Edition fourteen of Great Indian Rock 2010 was in the news right from the time an official announcement regarding the headliners was made. Four venues were decided with Bangalore and Delhi enjoying two days of the festival. But Pune happened to be that one blessed venue where both Meshuggah and Enslaved played on the same day. With no gig happening in Bombay this year too, everyone had to head towards Elysium Lawns, Pune.

But this definitive Indian rock fest did not have even half of the venue getting filled. Fuck it, that is okay. The event which was to begin at four thirty did begin on time because I reached the venue at around six and found myself in the arms of UK-band Tesseract. Wanted to watch Indian band Noiseware but unfortunately couldn’t and was told they made the most of this opportunity given to them. 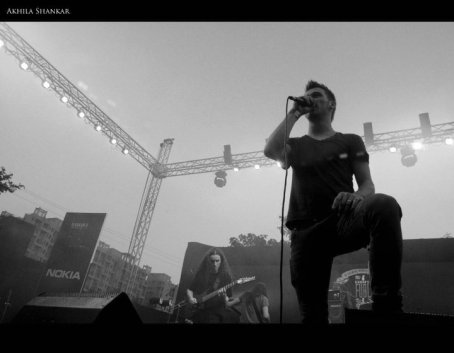 Now back to Tesseract and let me tell you straight that these guys formed the band not too long ago in 2007 and are already gigging every-fuckin’-where. Their tracks and their presence was hugged by the audience, as the band went on to play stuff from their old demo and the upcoming full-length. Sound was the best during Tesseract‘s set and even the venue was seen shaking. Respect to these youngsters who are on their way to superstardom. 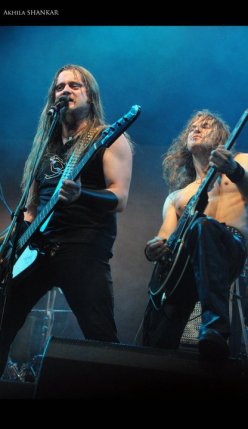 Next up were the Norwegians. Make no mistake in reading that because when I say Norwegians I mean black metal from there and that too from the same period when this nation was made aware of the genre’s presence. Enslaved, who have previously come to India in 2006, returned this time to cover more cities. The performance was raw and electrifying to those of us who have worshiped Norwegian acts. The majority of the audiences acted as if they weren’t present and weren’t impacted by the band’s presence. Enslaved‘s setlist included a mix of new, old and some really old tracks. Here’s what they played :

It was a win for the djent fans all along as was made clear by the energy that was noticed when the lights came on during Meshuggah‘s set. They came from Sweden with their instruments but took back a lot more. Djent expands to progressive technical thrash and Meshuggah are the torchbearers. I ain’t into them but then I’d be honest when I say I wanted to ‘watch’ them. The coordination and the exact replication of their songs only made people gaze in awe. The drummer was always in focus – before and during the gig – and the audiences had their ears erect just so they could notice an error. Well, that never happened and even though I saw the drive on my side of the stage reduce, the band was in no mood to hang up. Meshuggah lived up to its name. The crowd-interaction during their performance was as good as zero, though. Don’t be mistaken by the amount he speaks in the video below, because that is all he spoke. I guess.

The sound loosened somewhere in between the performances of Enslaved and Meshuggah but no major complaints about it. The venue did not really have food stalls worth visiting, and the bouncers had put on more weight since the last time I saw them in 2009. GIR 2010 Pune would be remembered for a lot of reasons, and by now even the readers of this blog know what they are. Thank you Amit Sehgal and everyone involved with this festival. I was standing with the audience and I know how it is to watch and be a part of this mini-festival where we were entertained by Tesseract, Enslaved and Meshuggah. 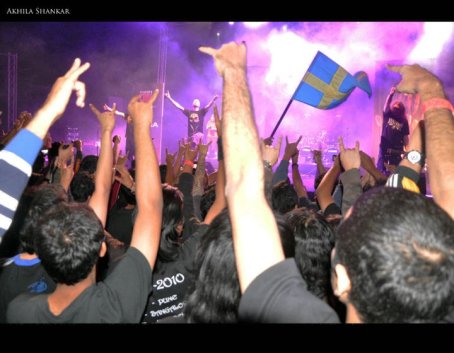 [ Pictures – courtesy of Akhila Shankar. Some more great shots taken by her are available here ]