Nargaroth aka. Kanwulf does things in his own fucking way and does it right. A name that was synonymous to raw black metal is now also a force to reckon with when it comes to creating ambient soundscapes that denote despondency. This sure has to do with Nargaroth (for newcomers, this is a one-man band) attaining enlightenment for having proved himself to be an able black metal musician. Be it the motley of emotions he displayed on Herbstleyd (in 1998) and Prosatanica Shooting Angels (in 2004), the cult rawness of Black Metal Ist Krieg (in 2001) or the somber version of the four seasons on Jahreszeiten (in 2009) it has all been rewarding.

Now in 2011, Nargaroth comes up with this new record Spectral Visions of Mental Warfare which again is not on the lines of his raw finesse. With repeated releases obeying to walk along the same way as Kanwulf‘s new musical directions we are more than happy to tag along. This seventh record cannot be said to be the German’s best or worst work because there isn’t a correlation between his albums. He now is taking the depressive side of life more seriously than ever and let me tell you that he discharges a lot of bleakness on Spectral Visions of Mental Warfare. 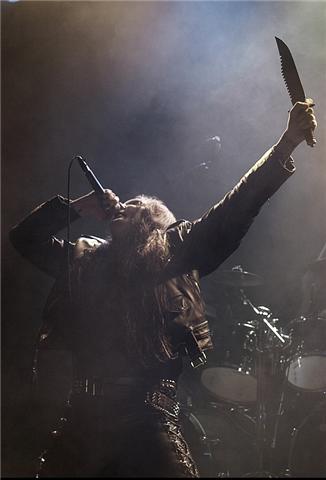 Opener Odin’s Weeping for Jördh is an almost seven minutes instrumental piece that is mighty melancholic. It’s second part at over two minutes as well as A Whisper Underneath The Bark Of Old Trees at ten and a half minutes are no different, both communicate similar sentiments. Rest of the tracks namely, An Indifferent Cold in the Womb of Eve, Diving Among The Daughters of the Sea and Spectral Visions Of Mental Warfare, carry a tempting celestial darkness, like how you’d feel if you’re amongst stars in the universe and it’s dark. Wow!

The screeches/narrations work in the background and allow the instruments to take the lead on each track. March Of The Tyrants and Journey Through My Cosmic Cells (The Negation Of God) are fucking trippy tracks. The former is electronica, Nargaroth plays electronica black metal.

Nargaroth‘s journey has been unique and I can forsee him having a good time telling his grand children about the evolution of his band. Take a dip in Nargaroth‘s new offering Spectral Visions of Mental Warfare. You might not bleed black but you’ll be surrounded by a similar looking colour. Hug Nargaroth once you are sure you have experienced what I said.

Is a verbomaniac. And a human being. And that's where the problem begins. END_OF_DOCUMENT_TOKEN_TO_BE_REPLACED
This entry was posted on Monday, April 4th, 2011 at 4:35 pm and tagged with 2011 metal releases and reviews, black metal Ist krieg, german black metal, herbstleyd, jahreszeiten, kanwulf, nargaroth germany 2011, prosatanica shooting angels, spectral visions of mental warfare review and posted in Album / Ep / Demo / Teaser Reviews. You can follow any responses to this entry through the RSS 2.0 feed.
« album review : Mare (2011) – Kampfar
album review : The Mirror of Deliverance (2011) – A Dream of Poe »