album : Phoenix Amongst the Ashes

On any given day if you play an album by Hate Eternal then the duration for which it is played would automatically become the most intense for that day atleast. Keeping their sound alive on their new album, American death metal band Hate Eternal have kept their date with brutality on Phoenix Amongst the Ashes. Fronted by Eric Rutan,  the record has him mercilessly riffing away to destroy your ear buds. His vocal delivery has and is more or less how we all know it to be. On their new album nothing pleases me more than hearing him force his breath out as fast as he can while Jade Simonetto pounds the drum skins. Bass could have been a little more audible although that is not at all a concern for enjoying the album. There are these passionate moments on the tracks that is like the band is abusing anyone else who tries to imitate them. They own their sound! 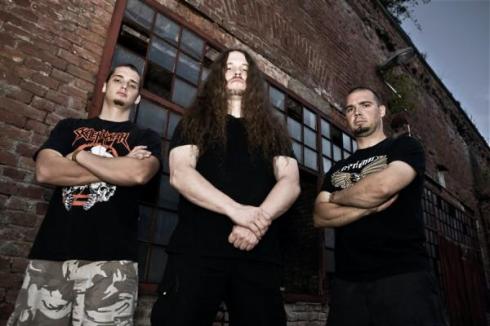 In one go the entire Phoenix Amongst the Ashes album sounds like there is a tornado on the loose making every effort to wipe you out. Wonder how the studio where these guys record their stuff responds to such extremism. I can totally imagine them bringing the place down, and if you hate where you stay then you should waste no time in playing these new ideas by Hate Eternal. With less variety as one of the shortcomings of this album, Phoenix Amongst the Ashes is still one monster of an album.

Is a verbomaniac. And a human being. And that's where the problem begins. END_OF_DOCUMENT_TOKEN_TO_BE_REPLACED
This entry was posted on Monday, May 9th, 2011 at 12:00 am and tagged with 2011 metal album releases and reviews, american death metal, brutal music, eric rutan, eternal hate, extreme metal, hate eternal band, jade simonetto, phoenix amongst the ashes review, tornado of riffs and posted in Album / Ep / Demo / Teaser Reviews, Uncategorized. You can follow any responses to this entry through the RSS 2.0 feed.
« album review : Circle Regenerated (2011) – Norther
Shades of Calm »