album : The Beginning of Times

Continuing from where they left off on Skyforger, Finnish musicians Amorphis have cracked the code once again. More like a second part of their earlier epic effort, The Beginning of Times has the band applying the melodic whipped cream to the remaining parts of their bodies. For someone who has been tripping on Skyforger like forever now, the sun doesn’t seem that bright after playing The Beginning of Times.

Owning your ears with the opener Battle for Light, the entire force of Amorphis is seen coming alive on the record. The transition from being a progressive death/doom band to a modern melodic metal/rock outfit has strengthened the whole idea of changing what a band plays. Along with Battle for Light where the band accumulates the death growls, we have a Mermaid that is again on the same lines but is more full of instruments.

The clean vocals by Tomi Joutsen throughout the record amplifies the sad bits. There are tracks on the album that faintly even touch power metal. More closer would be Soothsayer, On a Stranded Shore and Escape. Third track My Enemy is more aggressively built, shifting between clean vocals and growls. Many songs on The Beginning of Times are made with the central focus on keyboard. Sample a few of them like You I Need, Song of the Sage and Reformation. 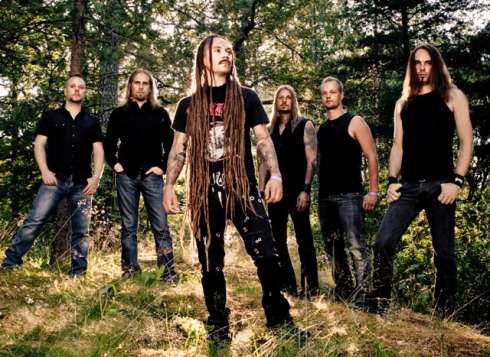 Everything that will ever please you on this album is the stunning play of fingers on the keyboard. This instrument has given so much to the sound of this band that taking it away would be more shocking than even the disbanding of Amorphis. The keyboard solos makes this one of the few bands that give direct competition to solos belted out on a guitar.

This new album would not come across as a surprise. You might like it a little less than Skyforger because when their previous album came out there was nothing that sounded like that. Now we have a reference and hence The Beginning of Times will be second in line, only after Skyforger. But for first timers this new offering from Amorphis will make you froth, and you will not require any more melody in the near future.

Is a verbomaniac. And a human being. And that's where the problem begins. END_OF_DOCUMENT_TOKEN_TO_BE_REPLACED
This entry was posted on Saturday, May 28th, 2011 at 6:38 am and tagged with 2011 metal album releases and reviews, amorphis finland band, finnish metal scene, keyboard solos, melody, modern rock / melodic metal, skyforger album 2009, the beginning of times review, tomi joutsen vocals and posted in Album / Ep / Demo / Teaser Reviews, Uncategorized. You can follow any responses to this entry through the RSS 2.0 feed.
« album review : Skyforger (2009) – Amorphis
album review : Illud Divinum Insanus (2011) – Morbid Angel »