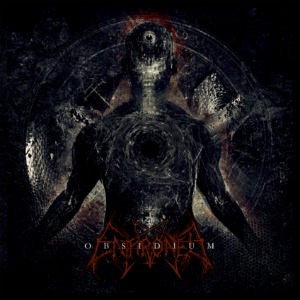 After a few not-so-terrific releases, Enthroned has managed to capture the essence of some real black metal we all need at the moment.

That Pentagrammaton wasn’t an impressive album is something I had made very clear but little did I know that Enthroned would take it so seriously and produce such a fiery black metal record in 2012. Enthroned is a five-piece satanic black metal band hailing from Belgium and they are very much from the early nineties era. 1993 to be specific. Despite one or two weak releases in the last few years one cannot ignore the strong force of musicians behind the venomous black metal that Enthroned have been offering. Things have been mended at the Enthroned camp, and Obsidian is spot on.

All their understanding of occultism have been squashed into nine different raging tracks. Diving straight into some pure uncompromised dark riffs, Obsidium contains a lot of desirable music which would very comfortably canoodle with the side of you that likes pure no-bullshit black metal. The riffs on Obsidian are like heavy winds blowing in pitch darkness, ready to blow away everything in their way. The blast beats (by Garghuf) would turn a dilapidated place into a palace. Take for instance the supreme song Nonus Sacramentvm – Obsidium. It, in no way, shows any signs of weakness. Right from the point of introduction, this track has oodles of black metal which can only make your spine stronger.

Then there is The Final Architect carrying a very heroic aura around it. Nornagest and Nerath Daemon time their entry with their respective guitars to merge with the band’s theme. Rarely do I get to see such empowering metal nowadays in the genre of black metal, considering there isn’t much to experiment in this genre or so is the image being portrayed by today’s bands. It has come down to a point where I listen to a new album and instantly know whether this is worth my time or not. If a band has it, it just has it. Well if it doesn’t then just move on. Horns Aflame, Oblivious Shades and Thy Blight Vacuum usher in the negativity, the progressive bits, and the growth in the album is already on display. Petraolevm Salvia is my pick from Obsidian for being ferocious, cold and energetic at the same time.

With Obsidian I can see Enthroned visiting their old days with double the determination and triple the belief in their music. You might hit and miss Obsidian, but that is why I am here for, to remind you about the best, worst and the mediocre releases. There have been better releases in 2012, no doubt, but Obsidian definitely isn’t littering our black metal. Light a campfire, sit around it and play Enthroned‘s new record to darken the occasion.

Is a verbomaniac. And a human being. And that's where the problem begins. END_OF_DOCUMENT_TOKEN_TO_BE_REPLACED
This entry was posted on Sunday, May 13th, 2012 at 7:21 pm and tagged with 2012 metal album releases and reviews, black metal, enthroned belgium 2012, garghuf drums, nerath daemon guitars, nornagest vocals, obsidium album review, occultism, satanism and posted in Album / Ep / Demo / Teaser Reviews, Uncategorized. You can follow any responses to this entry through the RSS 2.0 feed.
« Duck Off
album review : Where the Corpses Sink Forever (2012) – Carach Angren »