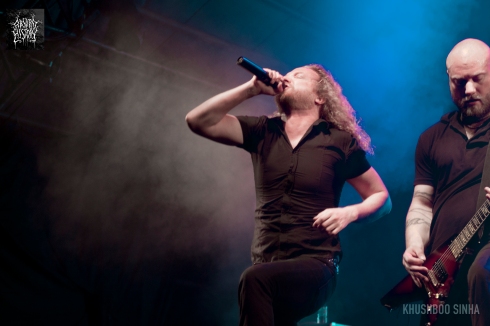 And now the fanboy speaks…

The only reason I had decided to travel all the way to Bangalore, almost a month back, was to see one of my favorite black metal vocalists and musician extraordinaire Vegard Sverre Tveitan in flesh, also known as Ihsahn to the world. When Emperor had dis-banded it was like a personal loss to me because I knew I’d never see them play live or record an album again. But that was that. 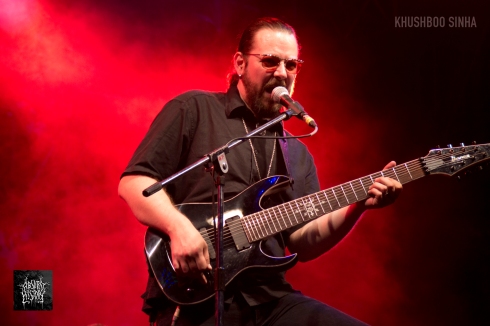 In 2005, Ihsahn formed a band under the same monicker to experiment with the various ideas that his creative and passionate mind kept coming up with. Not black metal by definition, Ihsahn made sure the underlying theme remains dark and picked up from where he left off on Prometheus – The Discipline of Fire & Demise, Emperor‘s 2005 release. Hence the progressive nature of the music on all of his solo works. 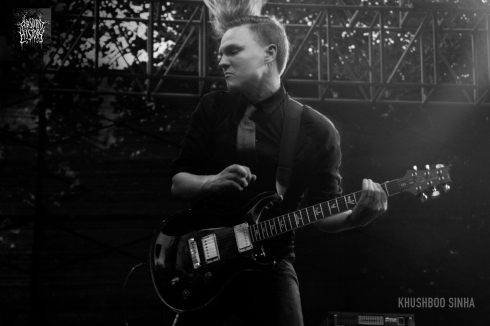 When Ihsahn stepped on the stage with his guitar, I simply couldn’t believe that I was staring into his eyes. He was the same man who wasn’t into any kind of politics when the black metal scene erupted in Norway in the early-1990’s. Instead he made more and more music to make his point. It took me, personally, a good ten minutes to survive the fact that I’ve seen a person who encouraged me to get my first tattoo dedicated to him, who opened new avenues in my mind, who made black metal my lifestyle and was influential to me in so many more ways.

This multi-instrumentalist performed tracks from Eremita, which released in 2012 as well as tracks from all of his previous releases After (2010), angL (2008) and The Adversary (2006). The years have been mentioned besides the album names in order to show his consistency as a musician. Although Ihsahn is a solo project the live members include Tobias Ørnes Andersen (drums), Tor Oddmund Suhrke (guitars, backing vocals), Øystein Landsverk (guitars, backing vocals), Einar Solberg (keyboards, additional vocals), Rein T. Blomquist (bass) – All of whom are members of Leprous from Norway. Leprous were also part of Bangalore Open Air and they performed just before Ihsahn on the Ronnie James Dio stage.

A legend made an appearance in India, entertained us, even said he was very happy for being able to make it and left me and I’m sure many others speechless by his humility, stage presence and undying love for music. It is moments like these that remain stored in a shell inside our subconscious mind and it is moments like these that make life worth living. I know Emperor fans are still trying to get their head around the fact that they actually saw Ihsahn, and we all should thank the organizers of Bangalore Open Air for making an intelligent and worthy choice. All the way from Norway!

Many might not have figured this out, but in Ihsahn‘s band there were only members of Leprous, apart from the main man of course. Hence Leprous got this big break of travelling all the way from Norway to not just perform with Ihsahn but to showcase their own slab of avant-garde progressive metal. Since I am a huge fan of Norwegian black metal I went there thinking they are just a band that’s there to fill a slot but they proved me wrong from the very first note. 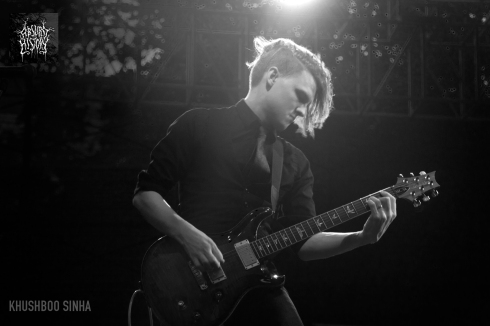 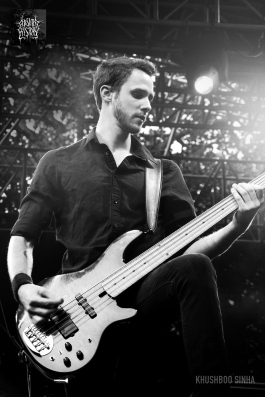 What’s so peculiar about Leprous you ask? It’s their flair. Grabbing eardrums by way of closely scrutinized progressiveness and attracting eyeballs by way of dressing up in a distinct fashion (think Akercocke, Ghost). Norwegians have these magnetic personalities and you end up bobbing your heads anyways.  Up on the Ronnie James Dio stage, Leprous made a major contribution to Bangalore Open Air, 2013. Downright progressive metal with characteristic riffs and consummate drumming crippled many in the crowd which directly earned Leprous many new fans.

Coal, Leprous‘s third full-length, was released this year and hence the set-list included most of the tracks from the new record. Each member brought in their own influences, and it looked like a large assembly on the platform with five members in the band. Vocalist Einar Solberg also doubled up as a synth player. Almost every other member, except drummer Tobias Andersen, boosted the band’s sound through backing vocals. Let’s not forget the elephantine addition by the other three significant members Tor Oddmund Suhrke (guitars), Øystein Landsverk (guitars) and Rein T. Blomquist (bass).

Thumbs up from India to this progressive act, by not just me but the audience who took pleasure in their music and the people who are going to discover them bloody soon through word-of-mouth. The conglomerate that is Leprous is a force to reckon with in the years to come, and I’m going to keep track of the happenings in their garage. Cheers, guys!

It was at Bloodstock Open Air last year that I saw India’s Demonic Resurrection play for a multiethnic crowd, and I wanted to see how accepting the audience is. And having seen them in our country for the last ten years I must say the response was as good as what I must’ve seen at one of their best gigs in India, if not better. This, when Paradise Lost were on the main stage.

Welcome to the Ronnie James Dio stage where Demonic Resurrection – the oldest, one of the the biggest and darkest Indian band that kick started this year’s Bangalore Open Air festival, but in broad daylight. Nevermind. Unfortunately the only Indian band to have been invited to play at the Bangalore festival (as the rest couldn’t for various reasons), Demonic Resurrection braced the audiences with their brand of demonic metal. Demonic metal, which I would say is a concoction of symphony, progression, speed, death, black metal with a slice of technicality is today very mature than what we have heard from them over the years. 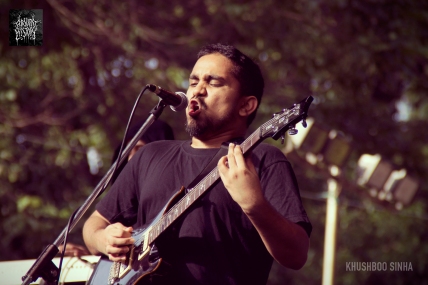 The set list consisted of tracks from their previous two albums, A Darkness Descends (2005) and The Return to Darkness (2010), out of the three that Demonic Resurrection has released till now. Sadly, since they were the first band to open Bangalore Open Air post the Wacken Metal Battle the audience was only a handful who treated themselves to a cocktail of some complex extreme metal. A sound that is one of it’s kind in our sorry ass nation, and a band that made its way to the top through sheer fortitude. While many tried to bring them down, the band retaliated with more hard work, thereby setting an example in the minuscule history of metal that India has. 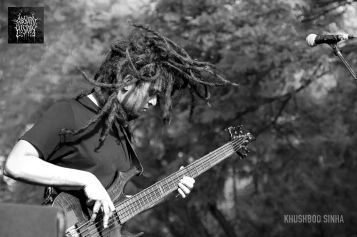 Frontman Sahil Makhija, a friend and a good musician, shouldn’t have called out the name of some guy from the audience as that, for me, does not add to the stage act. Crowd interaction is a must for entertainers, and Demonic Resurrection being the torchbearers of metal itself in India does not do it any less. The audience would be a lot happier if there is more interaction in general, than pointing out names. We are at a festival and in the audience there could be anybody from any place on the planet. That being said, Demonic Resurrection is tight as a tick, musically. Thanks to the ensemble star cast that comprises of guitar prodigy Daniel Rego, bass-nailer Ashwin Shriyan, impossible-to-match drummer Virendra Kaith and synth-lover Mephisto.

All set to release another album this year, Demonic Resurrection made sure they do not give the listeners a sneak peek of their yet-to-be-titled fourth album. If you are a fan then you’ve got to wait and watch out for their new sound, which according to guitarist Daniel is, “much more evolved than what we’ve composed in our earlier albums, in every department that DR delves into“. With a live performance like that, and an album in the pipeline I wish DR all the very best for their future.