album : To the End of Time

Drowning the Light is that unique sharpness your eyes are looking to expose themselves to. Another one of those many successful projects that Shatraug is now a part of, Drowning the Light is just as different as the rest of the bands he shares his name with. If you are into black metal and you don’t know who Shatraug is then you should ask yourself what exactly black metal is. The founder of Drowning the Light and the one who does it all on their 2007 album To the End of Time is Azgorh. This album is an interpretation that only a bunch of experienced black metal musicians could have put together as the feel of the tracks ain’t like any other band you and I have heard. 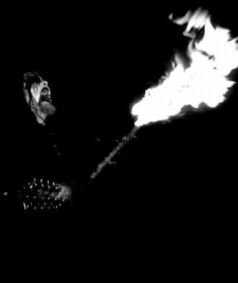 We’re led into pure black metal pleasure at the onset of the album which begins with the title track. People like me who listen to this genre with more concentration than is required would also get an answer to why the band is named Drowning the Light. The band carries an answer in it’s songs. They make you encounter a light that is seen smashing into darkness provided you are too stupid to limit yourself from letting all this happen to you.

To the End of Time is the best place to go before rest of the humans even think of getting there. Then everything including the end of time would become a crappy place to be at. Let this black metal band drown the light out of your life. In what way has the light’s presence benefited you anyways? You know I am right, so go download this black metal record that has only awesomeness to offer.