The title says it all. Possibly Black Sabbath‘s last performance of their career, and as expected drummer Bill Ward was replaced by Tommy Clufetos (drummer Ozzy Osbourne, ex-Alice Cooper).  They headlined Jim Marshall Stage on the final day of Download Festival 2012. Even after almost forty three years of the band’s formation, Black Sabbath showed more than a hundred thousand of us why they are still one of the greatest metal bands that’s ever walked the earth.

And, there is a slideshow as well! 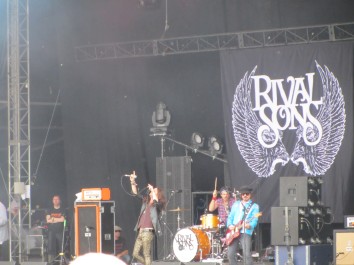 American blues rock band Rival Sons took to the Zippo Encore Stage on day 3 of Download Festival, 2012. Those of you who haven’t heard their second album Pressure & Time already should catch hold of it before you miss out on an opportunity to watch them play in your neighborhood only because you thought the band’s name does not make sense. What matters is the name makes sense to the band, and they ooze out rock n’ roll while paying equal attention to the blues and classic rock. Rivals Sons have also announced the title of their third full-length due to release this year on 17th September. It has been named Head Down.

Back in 2008, when Dave and his thrash orchestra Megadeth had hit Palace Grounds (Bangalore, India) I had lived through one of the most painful days of my life since I couldn’t attend the concert for some reason. Little did I know that years later I would watch one of my favorite band from the early 80’s thrash explosion at the mother of all events – Download Festival, 2012. Since Megadeth was to enlighten the audiences on how to play good live music on the main Jim Marshall stage (obviously!), I snailed my way closer. No more than a fifteen minutes wait, Mustaine coolly walked onto the stage. No epic background music, no introductory theme, no suspense, no bullshit. That’s what Dave is loved for!

The rifftastic extravaganza, coupled with metal’s most unique voice, began with Never Dead and went on to captivate the audiences, who let their hair down as Megadeth belted out classics like Hangar 18, Sweating Bullets, Public Enemy No. 1, Symphony of Destruction, Peace Sells, A Tout Le Monde and Holy Wars… The Punishment Due along with the rest of the tracks. They delivered one of the best set-lists of the festival, and I’m delighted to include Megadeth‘s performance as a part of my long term memory. Having already enjoyed all their albums and now that I’ve seen them live I’m a fan for life, and before I forget the wait for their fourteenth record just became slightly more difficult.

Check out these pictures taken during Megadeth‘s performance. In order to enlarge, click on them individually –

And, there is a slideshow as well!

Mysterious Swedish heavy metal outfit Ghost played this year’s Download Festival too, and they took to the Pepsi Max Stage on the last day (read Sunday, the tenth of June) of the fest. Particularly at 19:30 hours. With just one album out since their formation in 2008, and absolutely no piece of official information about who is behind all the chilling make-up, Ghost has already played almost every major metal festival in a short span, have impressed fans and critics alike, and are definitely the next big thing in metal. Considering Ghost hasn’t written a single new song since their first release, there had to be some way of differentiating their appearance at all the festivals (including last year’s Download) and Ghost decided to don white garbs for the very first time. The band has toured with Metallica, James Hetfield loves them, and when the whole of Anthrax had gathered in one corner of Pepsi Max Stage to partake in the breathtaking ritual that was to follow, I wasn’t surprised. As for their performance, Ghost proved to be the connoisseurs of their genre, which, on the whole, is satanic heavy metal and manages to take you through every age of metal. I think everyone should try and catch the band at these smaller platforms because Ghost is going to join the big league and hit the main stages soon, and then, there would be no turning back.

Slayer live at I’ll Be Your Mirror, London 2012 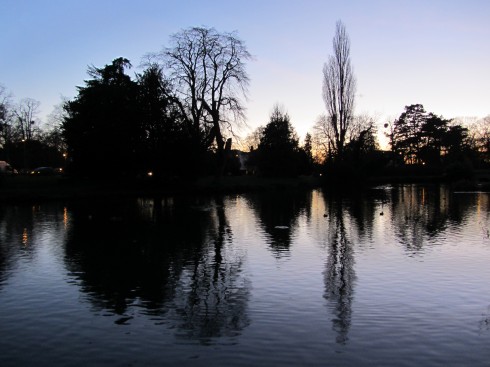 Six must-watch metal festivals and concerts in UK this year

Gigs keep happening every other weekend in England, but then there are a few exclusive ones that should not be missed. Here’s a list of six metal events that are going to shake United Kingdom to its foundations.

1. Destroyers of the Faith 2012 featuring Cannibal Corpse, Triptykon, Enslaved and Job For A Cowboy

The season kicks off with Destroyers of the Faith 2012. The gigantic death metal owners Cannibal Corpse are going to headline this event organized by none other than Metal Hammer. Supporting them would be this ass-kicking doom metal band from Switzerland Triptykon, Norwegian black/viking outfit Enslaved and deathcore band Job For A Cowboy. Nice balance of genres, and one gig that should not be missed.

Just have a look at the poster. Isn’t it fucking beautiful? The only festival in the world catering to the stoner, doom, psych and sludge metal fans, DesertFest has more than fifty bands playing across three venues. And the bands are not your formed yesterday playing today type. They are the best in the scene and you are sure to feel the pleasure in every corner of your body. That is what these genres do to you. Miss this event at your own risk!

As if Slayer‘s presence on the I’ll Be Your Mirror 2012 line up was not enough and now we are told the angry thrashers are going to play the ‘Reign in Blood’ album in its entirety. This event could possibly turn out to be the last gig for many metalheads as a lot of blood is going to be shed but I cannot die here because I have to move on to greener pastures post this event. The next few points would make it clear. I’m excited about all the bands that are playing on day one at I’ll Be Your Mirror. Go on, find out which ones I’m talking about.

This is Judas Priest‘s last world tour, so if you’ve missed them somewhere, you’ve just, missed them. But you can still catch the heavy metal awesomeness if you would be in and around London towards the last week of May. This could actually be the last time you will be able to catch Judas Priest live, so make all your other plans either before or after the weekend in question. I know you have nothing better to do so just take my advice and book your tickets.

Everyone who is even remotely connected to metal cannot be unaware of this name and Download’s one festival that happens every year. Then what is it that makes this mother of all events special this year? It is the festival’s tenth anniversary. The poster pretty much makes it clear what it’s going to be like but I’ll leave it to your imagination to visualize how massive this festival would be. If everything else fails to inspire you then remember that this is the only place where Black Sabbath are going to make an appearance this summer. There is only one word that can be used for those of you who are going to give this festival a miss. And that is stupid. No, it should be STUPID.

Well, well, well. Words fail me when I look at the Bloodstock Open Air 2012 announcement. One time I think that there is no band that has been left out and another time I wish that they add a few more names. Greedy and needy. It is just March right now and five months down the line the below poster can easily be used to just obliterate the weak. Get into a fight and show the BOA 2012 poster. According to me, Bloodstock this year has some of the most extreme names on it’s bill and would be one of the biggest metal gathering of 2012. 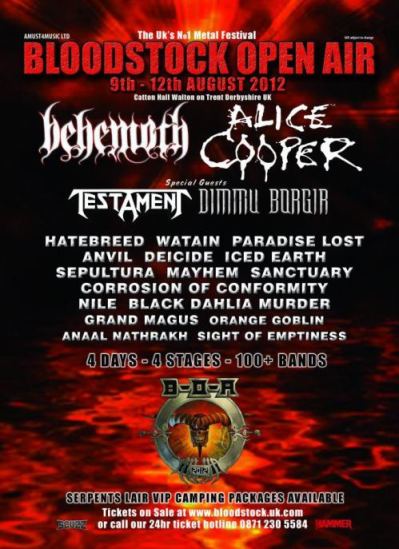 I deliberately skipped Sonisphere because it brings me face to face with a dull and unexciting list of bands. I absolutely love Ghost but the organizers of Sonisphere don’t love me. Let’s see how the coming months would affect my decision of not going for this festival that rocked the metal world by bringing together the big four of thrash in 2010.

Other mentions (not metal) – Fans of Red Hot Chili Peppers can catch them in the last week of June, and Pearl Jam maniacs need to attend the second day of Isle of Wight festival so obviously you need to buy the entire day’s ticket and put yourself through the rest of the acts as well. Not cool. Sadly I’m not watching both of these bands, but I just hope Adele plays one show in UK this year. I’ll book my ticket – first day, first show.

For now bookmark this page and pick your gig sensibly. I’ll see you at all six of them.