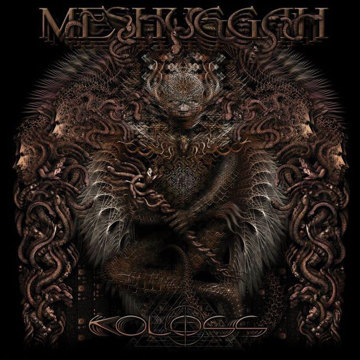 Having the power to make music the way Meshuggah does can never make any other metal band feel less awesome because nobody wants to make music like Meshuggah. It’s a matter of taste, and the five-piece Swedish musicians cater to one sub-portion of a portion of metal. I could not narrow it down more. Brilliance is one word I’d thrown in to describe their compositions, and they are brilliant in a list that features only them. There is no competition.

With Meshuggah, one only sat and praised as to how the drummer did what he did on a few songs or how the vocalist performed his growls at an odd timing, or how the guitarists play such complicated music with their simple instruments. But at the end of the day this isn’t a solo project you see. It’s a band. A metal band. None of their previous releases had all the qualities of metal, neither did they get you to move. Same is the case with Koloss. Only this time the band has managed some ‘complete’ songs.

I’ve heard people say that Cannibal Corpse can get to you, in a bad way, after you’ve heard their stuff for a while. I was also told how unbearable it becomes a couple of songs later. And the nasty things people say about black metal need not be written here. Well fuck you and your taste. At least I can clearly remember the pain caused by the migraine I caught during Meshuggah‘s show in Pune, India. Before you jump to any kind of conclusions this ain’t about getting even or anything, because I never mentioned that the people who said all that about Corpse or black metal are Meshuggah fans. It’s just that Meshuggah make lifeless music which is not appealing.

Even though Meshuggah is tricky, confusing music, one-of-a-kind and all, how can one enjoy their music is beyond me. Koloss is not like a must listen or anything, and even with it’s own moments intact, I suggest you jump into this territory only if you’ve got the buds to enjoy it lest you end up with a headache. Meshuggah means crazy is another language and they really drive you there. Mission accomplished, guys!